On the Subject of Primary Research... I've written about this before, and it's a hot-button topic for me, so you'll probably see me write about it again.  It's also widely debated, but this is something I feel very strongly about.  Feel free to disagree if you want, but follow my train of thought.  As writers, we strive for accuracy.  We strive to blur the worlds of fact and fiction (at least, in my genre) to give our readers a better experience.  But moreover, there are certain universal truths by which all things must abide.  Physics, for example.  The feeling of wind rushing through one's hair, for another.  Try to describe a steak dinner to someone who has never had one.  Now picture that person (who has never had one) trying to describe it to someone else who has never had one.  See the problem?  To that end, I'm of the opinion that writers need to go out and conduct "primary research" in the name of their art.  What do I mean?  Well…

Let's say you write fantasy.  You have a character that swings a broadsword around for an epic battle of several hours long (let's say from sun down to sun up).  You wrote a beautiful descriptive scene that sends shivers up the spine.  Yet there are still folk who cry foul over it.  Why?  Do me a favor… Pick up a broom (you have one of those, right?) and go out in your back yard and swing it around for as long as you can.  I'll wait.

Back so soon?  But that was just a little broom!  Barely five pounds the thing is!  Yet, you're exhausted after swinging it around for five minutes?  Well… Yeah.  Now picture doing the same with 15+ pound broadsword.  How long do you think you could swing that thing around?  About ten seconds, I imagine.  I don't particularly care how big or strong or "war hardened" you are, you need to know the fatigue one suffers, what it takes to swing that sword.

Another example:  A pair of cops (partners, natch) are in an apartment shooting at a third guy.  When one fires two or three shots, he whispers to his partner (so not to be heard by the bad guy) to go around back.  Problem?  You betcha.  Go to a shooting range and squeeze off a few rounds.  Not only are you not allowed to do so without hearing protection, but even with earmuffs on, you come away with noise damage to your ears.  Translated, it's really freaking loud.  So your cop B wouldn't be able to hear cop A if he fired in an enclosed apartment.  In fact, it would probably be a while before cop B forgave cop A for making so he couldn't hear his favorite Tori Amos CD for a while.

My point is this:  KNOW WHAT YOU WRITE.  Don't rely on movies or even other writers.  You have the responsibility to write about things accurately, and movies and television often get it wrong through lack of research.

But wait, you say.  My character is a (insert highly illegal and unethical profession here).  What then?  Surely you don't suggest I go out and murder/rape/drugs/politician…  No.  Of course not.  But your research can still be done.  How?  How about call the police station and ask to talk to a cop?  They actually have a position dedicated to doing stuff like this, and will sometimes welcome the request of a ride-along.  Explain what you're doing and why, and most of the time, they'll be happy for you to observe them.  Schedule an appointment to talk to a doctor about medical issues your characters have.  Make sure you're not wasting their time, but it can't hurt to ask, can it?

Below is a list of some of my favorite things that I've done in the name of "research" for books:


And there's a metric ton more stuff I intend to do to get the experiences right.

Oh…And since you're doing it in the name of "research," it's tax deductible.  No really.

Okay, so, yeah, I do lots of interesting things just so I'll have the experiences and I claim I do them all in the name of research.  But the truth is, I just do them because they're really cool, right?  Well… Yeah.  But that's not the real reason.  Honestly, I do them so I can be a better writer.  The fact that it helps me to become a more experienced and well-rounded human being is a happy bonus.  Eventually, if I keep going at this rate, I might wind up giving that "most interesting man in the world" guy a run for his money. 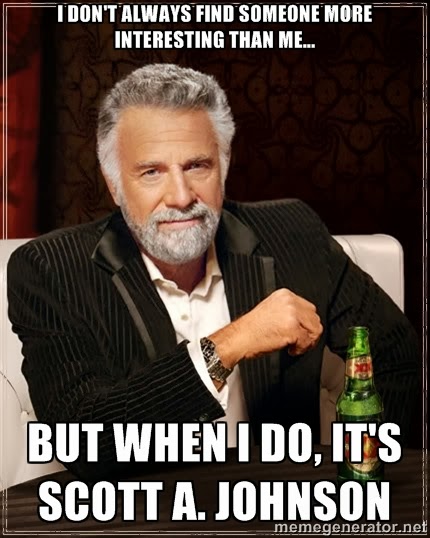 Think about it.  If you write horror, you don't have to kill folks, but it would be nice to get the physics right, find out how a real body would react, or even get the mythology correct.  Sci-Fi?  It's just technology that hasn't happened yet.  Physics don't change.  We've gotten so many of our advancements from Sci-Fi that it's not even a joke anymore.  And the last thing you want to do is come across as a know-nothing in front of a bunch of science nit-pickers.  Fantasy?  Get out there and swing your sword.  Find out what it's like to walk around in leather body armor all day.  You're an artist!  Who gives a flying bag of fetid dingo's kidneys what people think?  If you write romance, talk to your target audience!  Find out what they like.  Go to the types of places your characters go.  Do the kinds of things they like to do.  If you write erotica, call me.  I mean… Nevermind.

You get my point.  Create some great stories by going out there and having a few of your own.