How to Be a Writer - Part VI (Dealing with rejection) 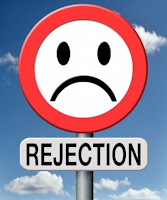 The dream of being a writer is wonderful. In theory, you write a book, send it off to either a publisher or agent, and they give you a suitcase full of money and you live happily ever after. However, that's not the reality. In reality, you spend months writing your book, send it off, and odds are more likely you'll be told "no." Worse, much of the time you'll be told "no" with a form-letter that gives you no clue why (or the classic "it's not you, it's us" line). Consider this: With expanding technology, the number of aspiring writers has grown in the past 30 years by incredible rates. Publishers can't possibly publish every book that hits their inbox, nor should they. They have to take into account not only quality, but marketability, audience, shelf space (yes, really) and a thousand other variables that can determine whether or not your book will make them money. It is, after all, a business. Yes, we're creating art. Yes, we're making political statements. Yes, we are creative. But at the end of the day, writing is about thirty percent art, seventy percent business. It's a cold truth, but it's a truth, nonetheless. So you, the artist, have to develop a thick skin. Of course you love your book. You wrote it. You know what you were trying to accomplish. But not everyone else will have that knowledge. And a rejection can come down to something as arbitrary as what the acquisitions editor had for lunch that day. No, I'm not kidding. So how do we, as writers, deal with rejection? And what kinds of rejections are there? Let's answer the second question first.

In my experience, whether sending things out to agents or editors, there are two kinds of rejection: Personal and Impersonal (form-letter). The form-letter rejection is the kind that most people get. They're maddening. They usually start off with "Dear Author" or have an obvious "insert-name-here" field. They then go on to a boilerplate that gives no reasons, no critique. More or less, it just says "No, Thank You." When you get one of these, you put it on your pile of rejections and move on. The second type, the personal rejection,  is, believe it or not, coveted in the world of writers. If an editor takes the time to actually pen (or type) a few personal remarks, that means they actually stopped their busy schedule of work to give you personal attention. That's huge. Seriously huge. If you receive a personalized rejection, you should take it as a complement, be encouraged.

So now to the bigger question... How to deal with it.

Well, you could go through the stages of grief.


But there's a healthier, and more productive, way of dealing with it. If you get the first type of rejection, the form letter, put it in your file and move on. There's nothing to do about it. Just move on.  I know it's hard to do, but you have to realize that 99.9% of the time, a rejection isn't a condemnation of you, the writer, so you can't take it personally. You have to understand that there are literally a thousand little things that make a rejection happen. Your book may feature themes that, while well written, aren't suitable to the publisher's image. Your book may need a few more rounds of editing and critique. Your book may not have an easily identifiable market. Who knows? The point is, there's no point in obsessing over it. You gather your rejection and move on.

If you get the second type, the personal rejection, you read it. You see if the publisher mentioned why it was rejected, and then you learn from it. Graciously. Humbly. There are stories all over the place of authors who clapped back at rejections, and those authors will never get their work published by that, or any other, press. See, publishing is a notoriously small industry with a long memory. We talk. We share information. And we share who acted like a jackass. If there's nothing to be gained from reading it, still take it as a complement. If you feel you must, send back a simple "thank you for your consideration" message, and let the matter drop. And then send them your next novel. None of this is personal. If it's not right for them, it's not right for them.

To put everything in perspective, every famous book out there was rejected by someone. And the most famous ones you can think of? Rejected multiple times. Consider:


That's not a comprehensive list, of course. But you get the point. Do not give up. Just because the first eleven places you send your manuscript won't touch it doesn't mean the twelfth isn't the home for which it's been waiting.

So the bottom line here is this: Rejections come. It's part of the gig. You deal with it by realizing that they're not rejecting you. You put your fingers back on the keyboard and you keep writing, no exit strategy. I'm proud to say that I've been rejected from some very fine publishing houses. Proud, because that means I'm trying.

Incidentally, and I've told this story before, I do have a favorite rejection I've received. It was from a magazine that I don't believe is still in print. But I got back the self-addressed-stamped-envelope (yes, this was in the days before electronic submission was a thing). Inside was simply a torn scrap of paper with the word "nope" scrawled on it. I still have it, somewhere.

That's it, folks. Next time, we'll talk about handling criticism.

Until then, write on!